You shouldn’t believe yourself

He had to fail hard in order to become one of the world’s most successful investors. Ray Dalio transformed that lesson in humility into principles for taking the best possible decisions. As a result, his investment company Bridgewater Associates became one of the most important companies in the United States.

Dalio published his key principles for success in the bestseller Principles. Cardano founder Theo Kocken met Dalio at Bridgewater’s headquarters in Westport, where they discussed the lessons executives can learn from a meritocratic company with a culture of radical honesty and transparency.

Theo: “You started investing at an early age, with all the hubris that goes with it. Behavioural psychologist Daniel Kahneman says that hubris is man’s greatest cognitive pitfall. In your book, you describe how it leads you to make your first major mistake, but you also explain how it made you stronger. What happened?”

Ray: “In the early 1980s, I had calculated that American banks had lent more money to other countries than they would ever be able to repay, so I was expected a major debt crisis and a huge economic crisis. It was a controversial idea that generated a lot of publicity, but it soon became clear that I had been completely wrong. I lost so much of my own and my clients’ money that I had to lay off all my employees. Back then, Bridgewater was still small, with just 8 or 10 employees. I was so broke that I had to borrow $4,000 from my father to pay my bills. It was an incredibly painful experience, but in hindsight, it was the best thing that could have happened to me, because it changed how I think about decision-making. It invested me with the humility I needed to counterbalance my guts. I started thinking about how I could be sure that I was right, changing my entire decision-making process. Nowadays, I try to find the smartest people who I know disagree with me so that I can learn to understand their point of view. Diversity is also very important to me, as it helps me increase the odds that I will be right from now on.”

Theo: “In your book, you say that all humans are naturally afraid of making a mistake. You make a very conscious effort to go beyond that, taking it upon yourself to learn from others instead of fearing other opinions. You distance yourself, as it were, from your human nature, to broaden your perspectives and capacity for thought. You may even say you become a different person.”

Ray: “Looking at things from different perspectives is tremendously exciting: it’s like transitioning from black and white to full colour and from two dimensions to three. All of a sudden, the whole world becomes a lot richer. Disagreement, when approached properly, is very valuable, and disagreeing with each other intelligently will give rise to a lot of improvement.”

Theo: “You changed how you make decisions.”

Ray: “The world around us is full of information, and the very best information comes from the smartest people. Why wouldn’t you want to synthesise all that info? Yes, I’ve changed my instincts, not only with regard to learning from others but also in terms of learning from my own mistakes. I’ve changed my instinctive response to making mistakes. My thesis is: pain + reflection = progress. I’ve come to see the benefits of mistakes. In truth, I’ve now reached the stage where it’s impossible to make mistakes, because whenever it does happen, I benefit from it, by learning a new lesson and avoiding that mistake in the future. Every mistake I make leads to another principle, which I’ll write down and memorise, so I’ll do better next time.”

Theo: “Involving diversity and diverging opinions in decision-making processes is paramount at Bridgewater, as is the credibility of the people you choose to involve. You base credibility on the degree of success someone has had in their particular field, as well as looking at their approach to cause and effect. Ultimately, that’s very personal, so how do you test them?”

Ray: “Lesson 1 is that you shouldn’t believe yourself. Try looking at yourself objectively, as just one of the members of the group. Forget about yourself and try to find out who you would trust most to make the right decision on the issue at hand. Pick the best, rather than instinctively opting for yourself. In order to choose the best, you assess each opinion on the basis of objective criteria. There may be scoring data, for instance, or someone may have had their credibility assessed before.” 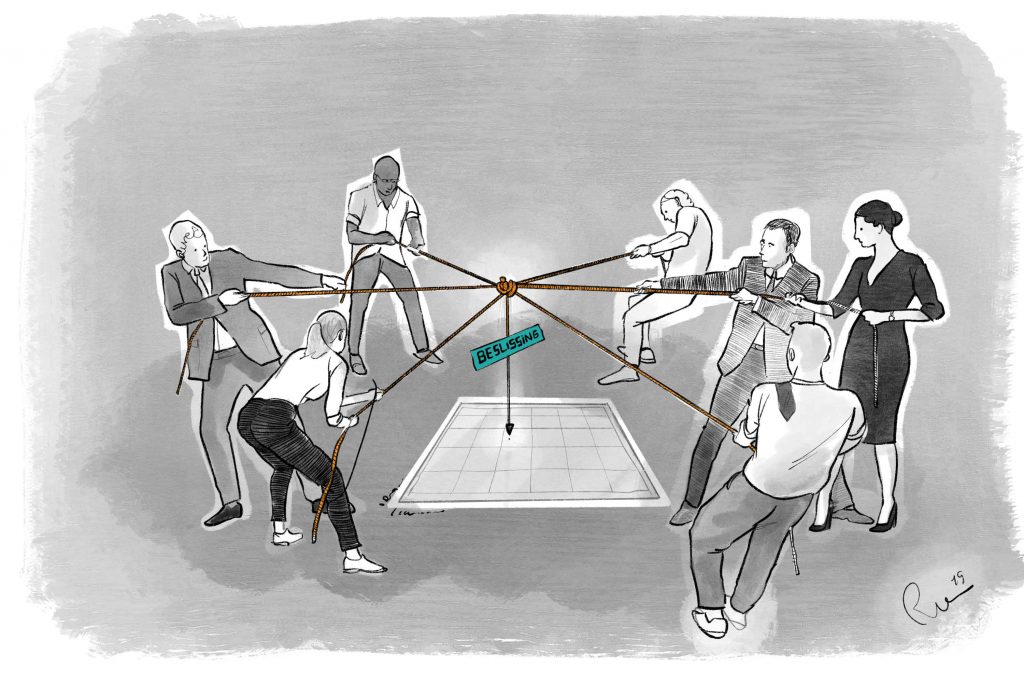 Theo: “When you have a large group of people to choose from, such as at Bridgewater, you can select the optimal group, with the best number of the most credible people. When you’re on the board, however, you’re stuck with a select group of people, and there may not be enough diverging opinions. How do you make sure that all decisions are discussed properly in such a situation?”

Ray: “If you want to make the best possible decision, involve the people who you think will help you get there. Knowing a lot about those people will aid the decision-making process, but it’s not an essential requirement. You could compare it to a GPS: if it tells you to go right, and you go left, that’s your choice. The GPS has given you all the information it can, but the next step is to make a decision on the basis of weighted credibility.”

Theo: “I don’t think many boards are real meritocracies.”

Ray: “But they should be. After all, you want the best ideas, right, based on merit? At any rate, I want the right answers. Collective, meritocratic decision-making is a lot better than sticking to your own plan, simply because you’re the boss, without any transparency. The greatest tragedy of mankind is that we insist on holding on to unsound opinions.”

Theo: “You ascribe your success to writing down your principles, which, in turn, resulted from ideas that went right and wrong. It was a learning process that you wrote down and turned into a company. Others should do the same.”

Ray: “A recommendation I’d give to everyone who has to make a decision is to take a moment to think. Possibly just after you’ve made your decision, or during the decision-making process itself. In any case, try to describe the criteria you’re using to reach your decision. If you manage to do so and keep a record, as it were, this can have unexpected, extremely valuable consequences, whether you’re making decisions to manage an organisation or deal with people. Adopting this approach will change the way you think about making decisions because by putting your principles into practice, you’ll create an organisation with tremendous internal coherence.”

Theo: “You’re even disappointed that brilliant minds from the past never wrote down their own principles.”

Ray: “It would have been better for them and for others if they had. I have been fortunate to have known some very special, extremely successful people who are no longer with us and who never wrote down their principles. That alone would have significantly improved their lives, which is why I’m so passionate about passing on my recipe to others. The first step in that recipe is to realise you may be wrong, so embrace disagreements. Then, triangulate with the smartest people you know and, finally, make a decision on the basis of weighted credibility.”

Theo: “Do you think the world would devolve into chaos if everyone were Ray Dalio?”

Ray: “It would be terrible for Ray Dalio, I can tell you that because I have to rely on other people who are good at the things I’m bad at.”