Our brain is the world’s most powerful simulator

The human brain is a wonderful information & simulation machine that can do infinitely more than even the smartest computer. We constantly weigh up and make decisions all day long, without being aware of it.

Argentine neuroscientist Mariano Sigman has made it his life’s work to study how the human brain works. Sigman is the founder of the Integrative Neuroscience Laboratory at the University of Buenos Aires, has won numerous awards for his scientific work and is the author of the international bestseller The Secret Life of the Mind. “Thinking about the brain involves thinking about everything. Ultimately, everything boils down to how our brain works. I’ve already found lots of answers, but every answer raises new questions, and I gradually discovered that the vastness of the unknown is much greater than what we do know. We keep opening doors, sometimes encountering unimaginable surprises. Our brain reflects the universe, it’s an enormous information machine that can understand and imagine nature.”

In recent years, Sigman has focused on decision-making processes. “Thousands of things happen at once in our brains. It’s an incredibly complicated structure populated by a multitude of processes that make up a refined, advanced decision-making system. Making a decision involves choosing between two or many more different options. You could picture the process as a competition between all options, or as a voting machine. Each option has its own distinct advantages and disadvantages, and though you’re not aware of the fact that there’s always a vote going on for the best possible option in your brains, it’s literally a race. Once an option has obtained enough votes, it’s given the green light and we make the decision. That’s very different from how computers work. The brain does not just calculate one possible scenario at a time, but thousands of them, whilst also anticipating their consequences. Ultimately, the brain selects the option that maximises the outcome based on experience. In fact, ‘simulation machine’ is a very good metaphor for our brain.”

Sigman finds it interesting that most of our decisions are made subconsciously. In fact, everything we do is primarily done subconsciously. “The brain controls everything we do: what we see and recognise, how we sit and how we stand. When it comes to more cognitive matters, such as deciding who to marry, what shares to invest in and whether or not to be risk-averse, we believe we are in control. That, however, is an illusion. Intuition is a good example of subconscious thought. Your brain is constantly trying to solve problems. Intuition is nothing more than the brain subconsciously and logically considering options and making a decision. You’re not aware of this process, as it happens entirely subconsciously. When you use language and numbers, the processes in your brain become a lot more concrete, but because language and numbers have their own limitations, concrete reasoning is particularly suitable for solving relatively minor problems. It’s better to rely on your intuition when dealing with major problems.” 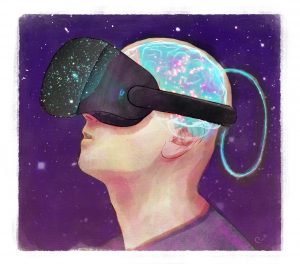 Sigman highlights dreams as a striking, literally visible example of the brain’s simulation process. “People have always tried to understand the meaning of dreams. They are often seen as oracles, with the power to predict. This can be explained by the fact that the brain is an excellent simulation machine and dreams are the perfect simulation moment. You’re imagining how something that hasn’t happened yet would unfold. You experience how it would change your life, how you would respond emotionally. Understood like this, we can explain all the stories about predictive dreams that have come true through the ages.”

Economists generally use multiple models to look ahead. “The process is basically the same, because you need a model to simulate the future and you constantly adjust the model based on the feedback you get. This approach works wonders in sports, for instance, where you can get immediate, high-quality, specific feedback. Your brain can model how to play a ball, depending on factors such as the weight of the ball and your own muscle strength. After you implement the resulting decision, you immediately see the direction & trajectory of the ball and know whether it reached the goal or not. Your brain can then adjust the model based on that feedback. In economics, however, there is much less feedback, mainly due to a lack of data points. Nonetheless, economists cling to their models, relying on them and attaching too much importance to the limited feedback they receive. That is what we call cognitive dissonance: we ignore the alarm bells signalling the weaknesses of the model, because it’s not as important as our desire to model the world.”

Axioms are not always true

According to Sigman, reasoning on the basis of wrong assumptions explains why people with the same background can have opposing opinions on the same subject. “Take, for example, the discussion about whether or not to vaccinate your children. The people who oppose vaccinations are not, by definition, irrational. They’re rational, but based on false assumptions. They are misinformed about the risks and convinced that they are right. This explains the paradox with the same education and background can still end up diametrically opposed to each other, and it also explains why people can be so convinced. Their line of reasoning gives their conclusions an air of truth and validity, and exactly the same thing happens in science and economics. Suppose you’re a Keynesian economic with a strategy on how to grow the economy, use taxes to regulate this growth, and so on. Your assumptions are certainly carefully reasoned, but the only problem is that axioms aren’t always true. Most economists tend to overlook this: assumptions may seem correct, but, ultimately, you can always question them in the light of new evidence.”

Many presidents are lonely and paranoid

Generally speaking, Sigman believes, people with strong convictions live in an echo chamber. “They find themselves in places where they always hear the arguments they want to hear. You may be isolated, for instance, as leaders often are. A lot of presidents are very lonely when they make decisions. They don’t trust anyone anymore, they get paranoid and they only trust themselves. They make decisions from within their personal echo chamber based solely on their own reasoning. When it comes to groups that are diametrically opposed to each other, you may think at first that neither group will change their mind. However, research has shown that when arguments are exchanged calmly and quietly, in relatively small groups, people are quicker to abandon extreme points of view than you might think. That’s because we never actually ask ourselves whether our assumptions are correct; we don’t question them. Decision-making is a subconscious process, which means we only see the outcome, not how we got there. In discussions, you have to make your reasoning explicit for yourself and for others. When doing so, you might discover potential weak spots or other options.”